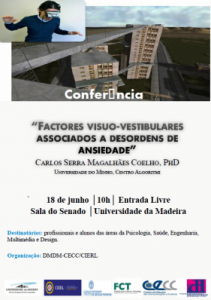 Abstract:   The interactive roles of the visual and vestibular systems allow for postural control within boundaries of perceived safety. In specific circumstances, visual, vestibular and postural interactions act as a cue that trigger fear, similarly to what occurs in motion sickness. Unusual patterns of visuo-vestibular interaction that emerge without warning can elicit fear on its own, and then become associated to a certain stimuli or situation, creating a CS-US association, (i.e., phobia), or can emerge without warning but also without becoming associated to a particular concomitant event (i.e., panic). Depending on the individual sensitivity to visuo-vestibular unusual patterns and its impact in postural control, individuals will be more or less vulnerable to develop these disorders.

We propose a mechanism also sufficient to explain the lack of certain fears albeit exposure. Following this rationale, a new subcategory of anxiety disorders, named visuo-vestibular fears can be considered. This model brings important implications for developmental and evolutionary psychological science, and invites to place visuo-vestibular fears in a particular subtype or specification within the DSM-5 diagnostic criteria.

Curricular note: During PhD Carlos addressed the use of virtual reality as an instrument to aid the treatment of fear of heights (acrophobia). The most interesting finding was that people were more afraid of heights while moving along a balcony, and this fear was mitigated when they stopped moving. This suggested that a visuo-vestibular conflict could be triggering this fear.      Soon after PhD Carlos worked at the University of Madeira but in 2007 after being awarded a Postdoctoral Research Fellow from the Portuguese Foundation for Science and Technology (FCT) he went to the University of Queensland (Australia). Here he worked with Dr. Guy Wallis, and investigated factors related with fear and threatening stimuli. Carlos also collaborated with well-known researchers in the field, such as Ottmar Lipp, Allison Waters and Helena Purkis.

Among the studies he did during this period, his favourite was connected with the PhD findings. The main discovery was that people with 1) poor postural stability in the absence of visual cues and 2) more visually field dependent (VFD), were more prone to have fear of heights. Curiously, anxiety tests did not show additional predictive value. These findings suggested once again a strong visuo-vestibular influence in acrophobia.

After his postdoc Carlos joined Dr. Bredy lab, at the Queensland Brain Institute, where he helped to discover epigenetic mechanisms contributing to fear memories. This experience was important to improve his neuroscience knowledge, but the interest in visuo-vestibular contributions to human fear was too solid and Carlos is now pursuing this idea. With that intent, Carlos recently become a FCT postdoctoral research fellow again, based at the University of Minho were he works in the Laboratory of Visualization and Perception. Carlos work builds on previous research and complements a behavioural perspective of anxiety disorders with a clinical, psychophysiological and neurological one.